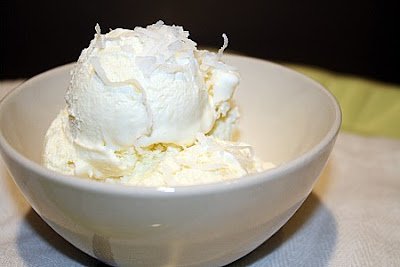 The richest coconut ice cream you will ever taste! This is rendered very smooth and creamy by adding egg yolks.

Toast the coconut for about ten minutes or until golden in a pan on the stove or in the oven.  Set aside.

Heat the evaporated milk, coconut milk, coconut cream, and agave syrup or sugar in a medium saucepan on the stove until it simmers. (You won’t need much sugar because the coconut cream is very high in sugar.) Do not boil. While this mixture is heating, mix up the egg yolks in a separate bowl. Take 2 cups of the simmering mixture out of the saucepan and add it into the egg yolks, whisking quickly. Now, incorporate the egg yolk-milk mixture back into the simmering milks in the saucepan and bring to a simmer once again or until the back of a metal spoon is coated by the thickened custard. Remove from stove and mix in the rum, if using.

Chill mixture in your refrigerator for at least an hour or two. Pour into ice cream freezer and freeze. Half way through the freezing, add in the toasted coconut.

Notes: *I use Trader Joe’s. ** Found in your grocery’s liquor dept.

For recipes from my cookbook: "Delicious! The Very Best of Gluten Free and Wheat Free Cooking. It is available at:

Posted by "Gluten Free Farmer's Daughter" at 2:06 PM No comments:

Look Inside My Cookbook!

"Gluten Free Farmer's Daughter"
Welcome to my blog! My blogs, celiac disease informational website and now gluten free cookbooks were created as an expression of my passion for the country lifestyle and also to help support my mission to maintain the integrity of the gluten free foods that are prepared in my home as wholesome as possible. I am a Midwestern farmer's daughter and a farm girl at heart...but also gluten free by necessity. I grew up in the 1950's; the daughter of an Ohio farmer. I invite you to tag along while I collect recipe ingredients from my Northern Arizona garden or the nearby farmer’s market, fruit from the orchard, eggs from the hen house, plucking the first asparagus of the Spring from the earth, and even experimenting with growing gluten free grains that can be ground into flours! Come with me to a place where the food is wholesome and delicious...where simple pleasures enrich families and embrace friends. I welcome you to my simple country life. Take a seat in that old rocker on the porch and linger for a time... I truly hope you enjoy your visit!