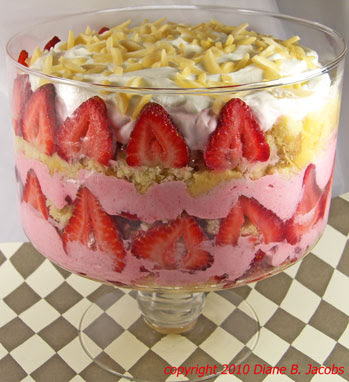 Change out the fruits that are used in this gluten free trifle to create a very special dessert year round and with what fruit is available and in season. Vary the liquor by using sherry, rum, amaretto, and even more exotic liquors like Tuaca… and as in this case, honey liquor. It’s fresh, colorful and fruity…for any holiday or season!

Make the cake in advance. I prefer baking the cake in an approximately 10 x 13 inch sheet cake pan. When ready to use, break apart cooled cake into cubes.

Mix the strawberries with sugar, cover and allow to macerate in the refrigerator for an hour or so. Whip the whipped cream in a large bowl until it holds stiff peaks and mix in the sour cream on low speed.  (Adding the sour cream is optional, however, it does add more of a crème fraiche richness to the trifle.) Fold the jar of strawberry preserves into a separate bowl with a little over one half of the cream mixture.

Place half the cake cubes in a large glass bowl or trifle dish. Drizzle one half of the liquor over the cake cubes. If using, drizzle about 4 tablespoons strawberry ice cream topping over the cake. Now spoon half the berries and accumulated juices over the cake. Spread half of the berry preserves with whipped topping mixture over the berries. Repeat the layers again, beginning with the cake cubes, the remaining liquor, roughly four more tablespoons of the strawberry ice cream topping, the remaining strawberries, the other half of the preserves mixed with whipped cream... and end with the plain whipped cream (that doesn’t have the preserves mixed in) and the almonds for garnish.

Refrigerate the trifle for up to 4 hours. Take care not to allow the trifle to sit more than a few hours, or it will over macerate and become too soft and mushy.


For more recipes, check out my cookbook: Delicious! The Very Best of Gluten Free and Wheat Free Cooking

The cookbook is available at: